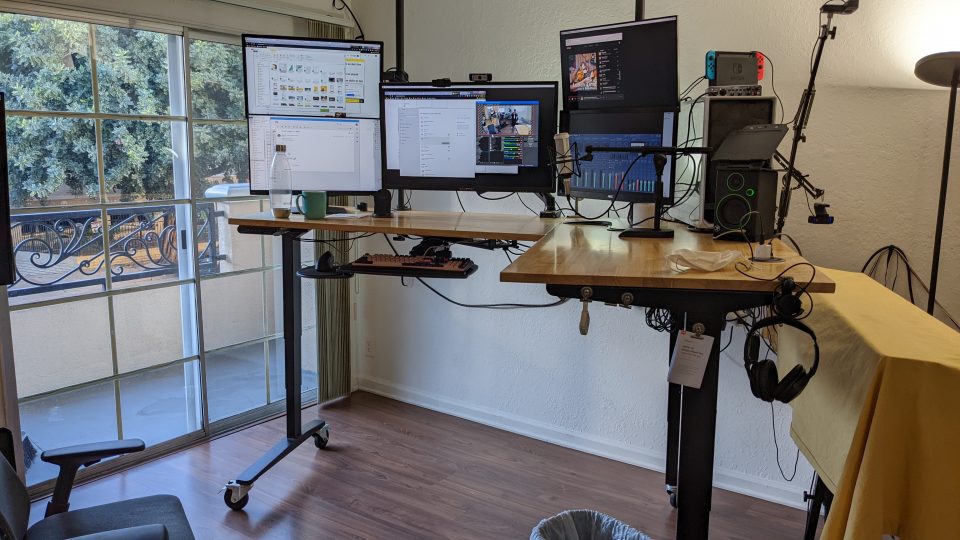 I remember around 12 years ago, I slowly started having more and more shoulder and back pain. Friends and colleagues would touch my shoulder and they would all react the same – “oh no why is this so stiff.. this is no good”. I was often working on a lot of time sensitive projects with tons of side mini projects or interruptions. Was tense all the time, racing against time. Sometimes the back pain would get really bad, and I needed to lie down for a couple days. I tried alternating between standing and sitting to give some variation to the posture, but it didn’t make a ton of difference.

Then someone on Twitter recommended getting a keyboard tray. So in 2020, I put a together a standing desk with a moving keyboard tray. My shoulder pain was instantly gone.

I was starting to have some other ergonomic problems though. The tray’s mouse support was a bit weak, and I kind of struggled finding the right combination of the difference pieces of the equation (desk, keyboard tray, chair armrest) being aligned together. One of the trickiest things was putting the armrest just at the right height where it wouldn’t bump into the mouse pad level, but also right above it so that I could rest my forearm over the armrest while holding the mouse at the same time. Maybe this expectation is unrealistic, I’m not sure. The fact that the surface on which the mouse rested was (slightly) wobbly was not the best. I noticed it the most when playing games. Also my belly fat was bumping against the desk and pushing back.. anyways various things that didn’t quite align.

I used that setup for about a year and half, and my mouse-holding left forearm was starting to hurt, and I noticed that I was often turning my entire torso to one side (maybe right side?) by about 10 degrees, and that was starting to have a toll as well. And my chair had its own problems.

So after all that, last Fall I tried out the idea of removing the keyboard tray. I put the keyboard over the desk. My shoulder was not hurting as much as before I think? But a new problem was that:

This was causing a different kind of back pain, I think.

So today I put the keyboard tray back, and adjusted monitor heights, etc. I was stressed that it might take a long time to install it, like it was the first time I installed it, but now that the screw drill holes are in place, it was pretty easy.

I like how I can touch the ground comfortably with my feet now. And the mouse situation is exactly the same as before XD. Hopefully I won’t be removing the tray again a few months later with new problems. 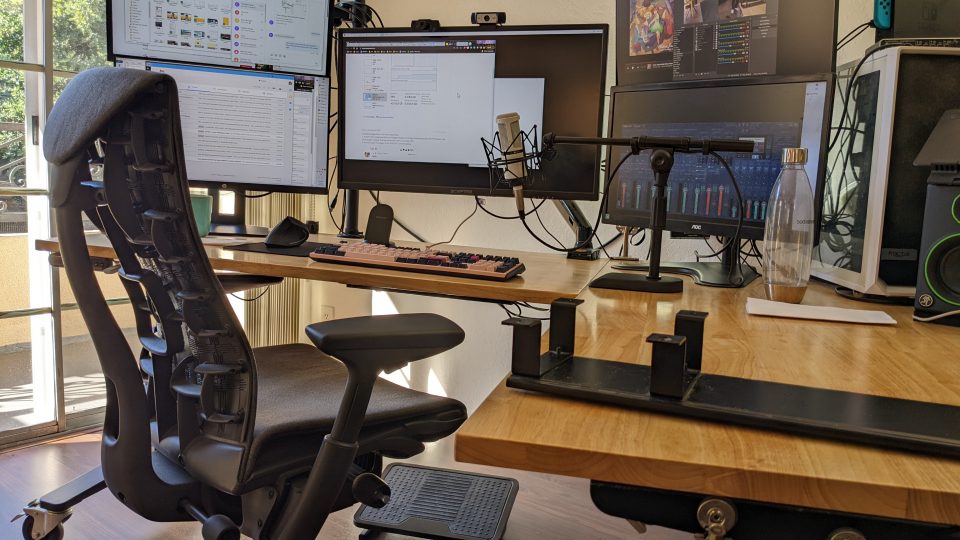 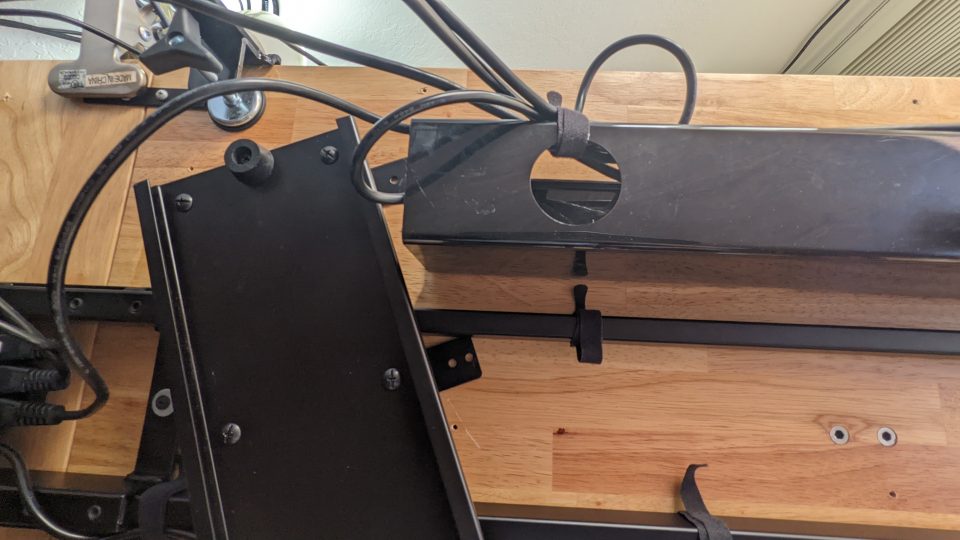 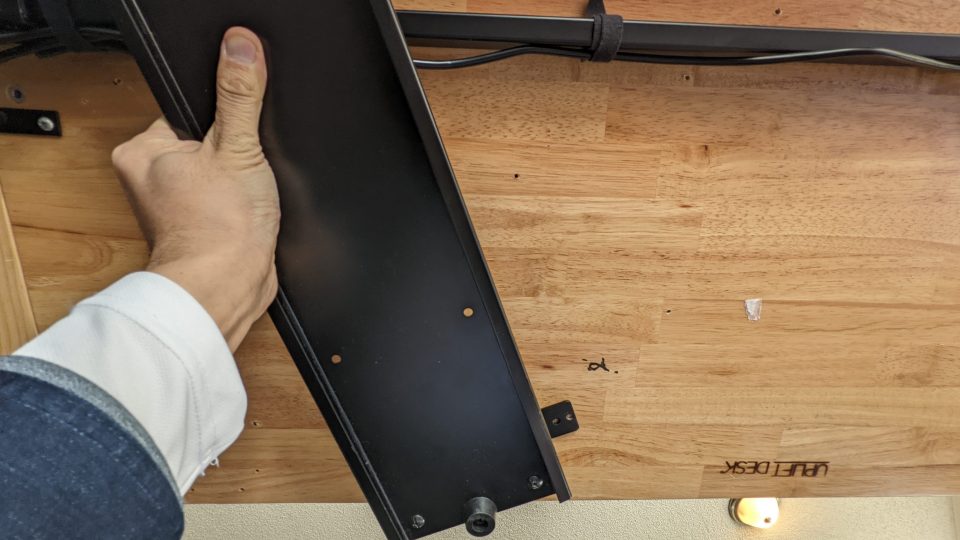 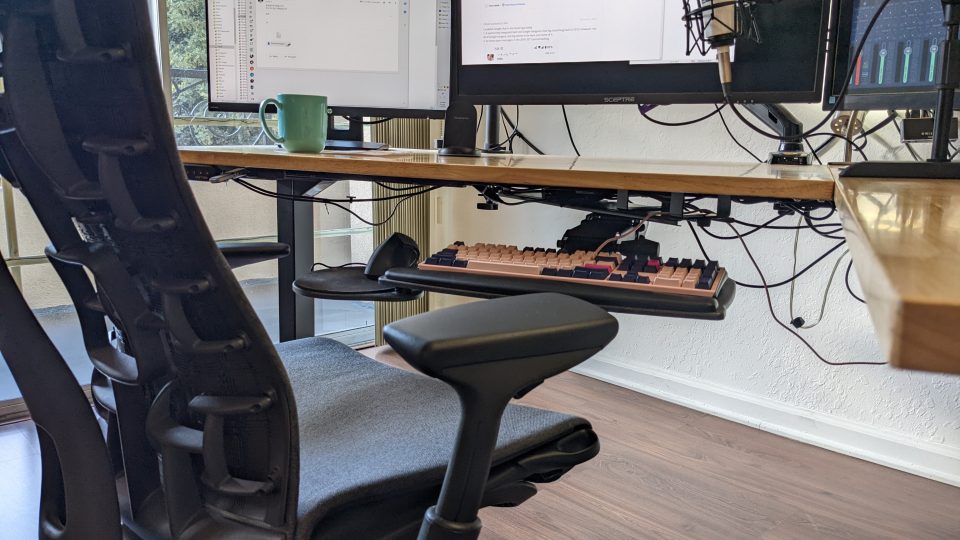 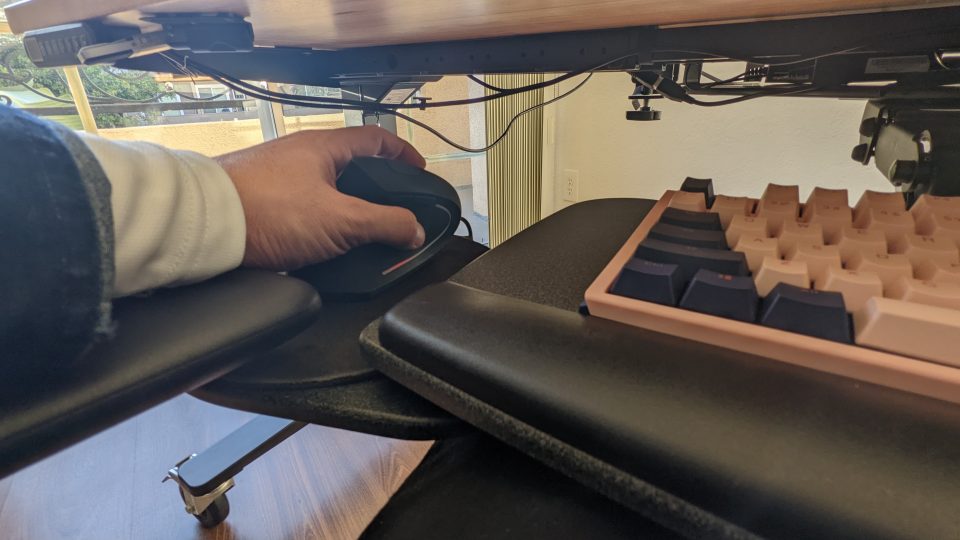