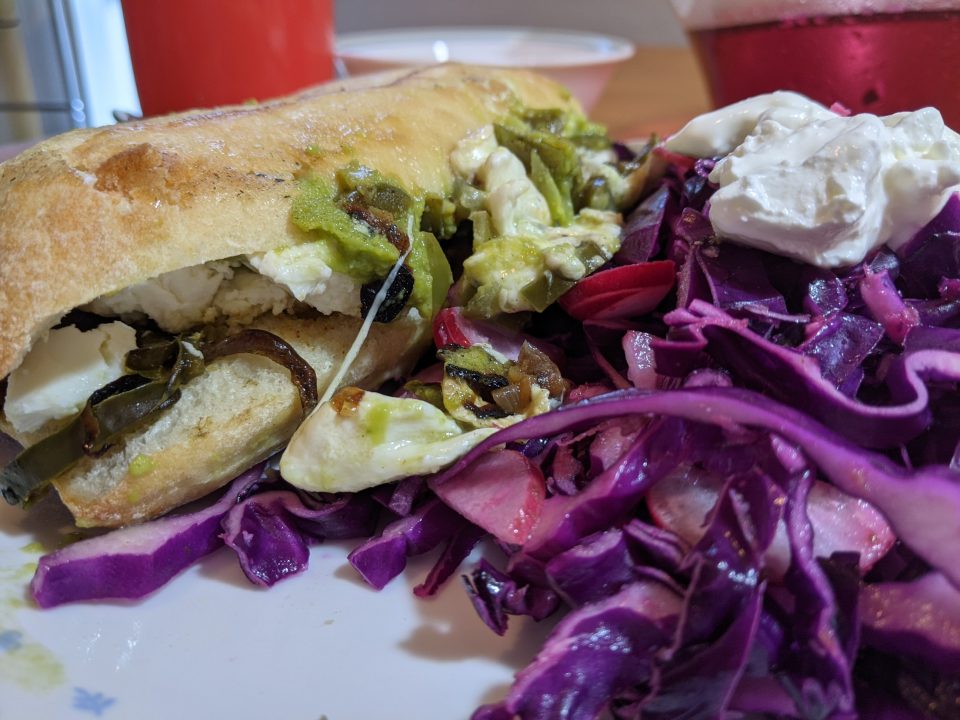 Hmm, this torta was a trip. When it came to putting all the ingredients together and pushing down the bread with the filling in it, I came to the terrible realization:

While cutting the bread, with some foresight of this, I cut the bread just short of going to the other end to ensure there would be a point of articulation so that I could lean the fillings towards that side and hope it doesn’t spill out the other end.

But I overlooked how smooth and delicate pan francés is. It just kinda tore open. I think. I was too afraid to check.

I used one of the newer oven trays I bought recently to push down on it. I was also afraid of pushing too hard, lest the fillings fall out, start burning, and initiate the third Great California Forest Fire. Some cheese fell out, and so did a little bit of guac and onions.

I pulled out prematurely, just in case, to save the trees.

Eating it was a disaster. Everything was falling apart. Gravity was strong on this one. But it tasted so good. The cheese. The cheese especially was stubborn on being on the plate more than on the bread. The guac. The not-yet-burned onions and jalapeños. It was so good, but so confusing. But so good. But very confusing and very destructive. But very yummy and I would have never imagined a vegetarian torta to be this good.

Not unlike Inugami Korone’s videogame livestreams on YouTube, where it is clear that everyone is laughing and having a good time.

Except there is one problem:
I don’t speak Japanese.