No Comments
Outside, People 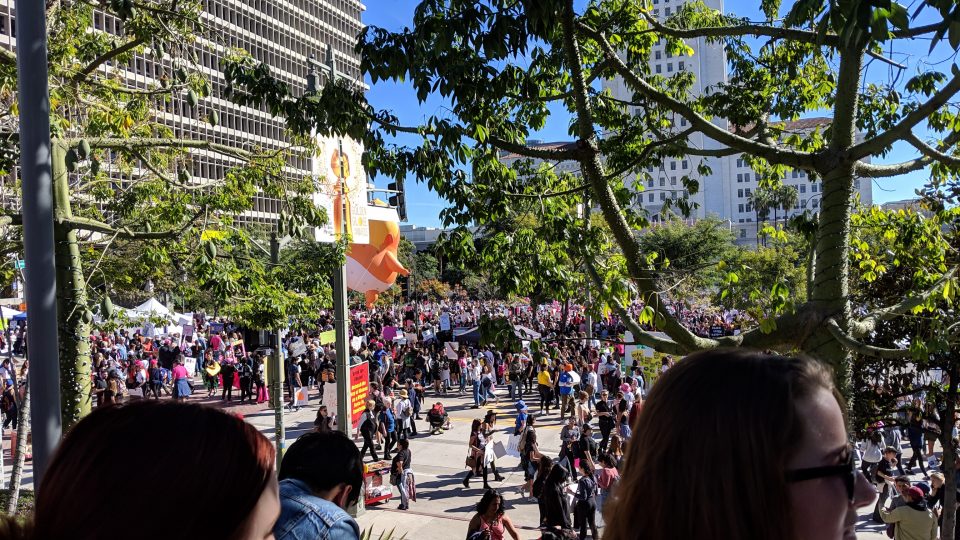 I was thinking last year that there was a bit of a personal journey for me in the turbulent progression of events that led to our mass departure from KRC two years ago. And that might have started in a protest march on January 19, 2019.

When we went to the Women’s March in 2017, ten of us got off the Pershing Square subway station, with our drums and drumming clothes ready, and got stranded in the station surrounded by tens of thousands of people who had flooded the station. There were some 20 more people from our group that we needed to get together with before we would start marching, because we each had pre-arranged roles. Many were drumming, some were to lead the chants, some would walk closely with the seniors to make sure they don’t get lost, someone would go get some snacks for lunch after the march, coordinate the cars, take photos and prepare a press release to submit to press, talk with reporters, post on social media, etc. We also couldn’t communicate with each other – there were so many people that cell towers stopped working.

I think another group of like 3 people who also got stranded elsewhere just decided to go marching on their own. That was probably the right decision. Our Pershing Square group made a little space in the corner and waited. We watched thousands of people emerge up from the subway staircases. We drummed a bit in our tight little corner. We waited there for like 2-3 hours hoping to miraculously link up with the others, and then decided to go back as the march was folding.

In 2019, I think our Orange County team went to join marches in OC. In LA, we decided to not go this time – people were exhausted from recent campaigns. Then on that Saturday morning, I decided to go join the march alone.

That experience was refreshing. People were walking. It was a chill warm sunny day. Some were holding signs. Some were chanting, sometimes. People who had come in groups were chatting.

There was nothing that I had to do. That’s.. kinda obvious, but it did hit me as a cultural shock. I had joined very few protests in 20 years where I didn’t have an assigned role. It was always busy, always on the clock, always checking to see how our timetable was moving along. Or carrying our heavy metallic gong. Or running. But here, there was none of that. I walked a bit, chanted a bit, then hung out at the park for a bit, chatted briefly with some people, and then at some random moment felt like that was a good day, that I might leave. So I went home.

It was a very strange, foreign-feeling experience. If there was a spiritual starting point to the journey that ended with me joining others in leaving KRC after 13 years with the organization, this was probably it.

The song is 잠이솔솔 from J Rabbit. I think it captures the vibe well.